I was at a bit of a loss about what to write about this week. My last post was straight after this year’s Eurovision Song Contest so ended up being about the Swedish band Blue Swede and their song Hooked on a Feeling. The way the mind works, this got me thinking about the song Crystal Blue Persuasion by Tommy James & The Shondells which I came across recently when watching the brilliant television show Breaking Bad.

The main character, a mild-mannered chemistry teacher, inadvertently finds himself in charge of the industrial-scale production of blue-coloured crystal meth so the song was perfect for a particular scene in the show. It turns out however that Blue Swede recorded a cover of a Tommy James & The Shondells song as their follow-up to Hooked on a Feeling, so it wasn’t just the word “blue” that caused this connection, their whole sound and style must have reminded me of Tommy and his band. 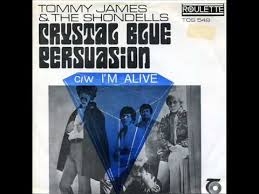 As I have written about Breaking Bad before however, and as I don’t have any particular memories of Crystal Blue Persuasion other than from that show, I decided to go down another route. The song Hooked on a Feeling was from the soundtrack to the movie Guardians of the Galaxy which very effectively used lesser-known songs from a specific era to give the main character an anchor to his past. Another director who uses lesser-known songs for his soundtracks is Quentin Tarantino, and lo and behold, it turns out that Hooked on a Feeling was also used in Reservoir Dogs – We keep going in circles here.

My favourite Tarantino soundtrack is the one he put together for Pulp Fiction where the songs used were as important to the success of the finished movie as the screenplay and performances by the actors. Who could forget the opening title sequence featuring the Dick Dale classic Misirlou played at breakneck speed – This was nominally “surf rock” but the audience were left in no doubt as to what kind of movie they were about to watch. Tarantino called it “rock ‘n’ roll spaghetti western music” which is a perfectly fitting name for it.

The great thing about Pulp Fiction is that it takes place in a stylised world which cannot really be attributed to any particular era – We are led to believe it was contemporary but the eclectic mix of American rock and roll, surf music, pop and soul made the time frame irrelevant. This is yet another movie I had to immediately watch for a second time after finishing it, as it was just so mind-blowingly brilliant. The three different storylines, told out of chronological order, threw up some unforgettable performances (Samuel L. Jackson’s Jules reciting the passage from Ezekiel) and of course we had the iconic twist contest featuring Mia and Vincent (Uma Thurman and John Travolta).

Difficult to pick a stand out track as they all contributed so brilliantly to the look and feel of the film but quite appropriately I think I’ll choose the song used for the twist contest – You Never Can Tell by Chuck Berry. It was a hit for him in 1964 but of course became popular again when the film came out in 1994. A classic rock ‘n’ roll tale of young love, which against all the odds seemed to have succeeded – “C’est la vie” said the old folks, “It goes to show you never can tell”.

So, two songs from crime dramas where music is used to great effect. The creator of Breaking Bad, Vince Gilligan, pays homage to Tarantino right through the whole series by using similar characters, camera angles, names and of course music choices. Didn’t think I would end up writing about LA Mobsters when I started this post referencing the Eurovision Song Contest but it just goes to show, “You never can tell”!

You Never Can Tell Lyrics
(Song by Chuck Berry)

They furnished off an apartment with a two room Roebuck sale
The Coolerator was crammed with TV dinners and ginger ale
But when Pierre found work, the little money comin’ worked out well

They had a hi-fi phono — boy, did they let it blast!
Seven hundred little records all rock, rhythm and jazz
But when the sun went down the rapid tempo of the music fell