If like me you became a teenager in 1973, when I mention Jackie magazine you will know exactly where I am coming from. Between 1972 and 1974 the magazine was selling in excess of 1.1 million copies per week and was a must-buy for “go-ahead” teens – its target market. I don’t know if my friends and I were indeed all that go-ahead, but Thursday was one of the best days of the week as it was not only Top Of The Pops night, but it was also the day when we picked up our copy of Jackie. With centrefold posters of the pop idols of the day, titbits of gossip about their likes and dislikes, great fashion spreads and the Cathy & Claire page (where all those problems we couldn’t possibly discuss with our mums were aired and very sensibly answered), it truly was the bible for girls trying to find their way in the world. 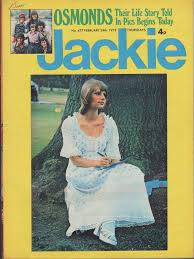 As we all know, they will make a musical about practically anything nowadays, but last week I went to see “Jackie The Musical” (excellent by the way) and if this blog is all about looking back nostalgically, by revisiting the Tracks of My Years, this was the stage musical equivalent. The main character was 54-year-old Jackie, a woman with an adult son still living at home, going through the trauma of divorce, and experimenting with online dating. Whilst packing up the contents of her house she finds her old teen magazines and of course starts to reminisce about her hopes and dreams back then. Her younger self even makes an appearance dressed in very authentic early ‘70s-style clothing (flares/big collars/platform shoes) to great comedic effect, often quoting verbatim what Cathy & Claire would have advised. 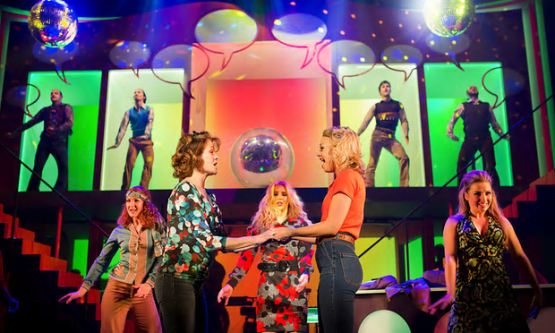 But of course the raison d’être behind any musical is the performance of the songs and this Jukebox Musical did not disappoint – Interwoven into the storyline were a host of very nostalgia-provoking songs such as Could It Be Forever (by David Cassidy), I Love To Love (by Tina Charles), Crazy Horses (by The Osmonds), The Things We Do For Love (by 10cc), Hold Me Close (by David Essex), Tiger Feet (by Mud), Puppy Love (by Donny Osmond) and many, many, more. 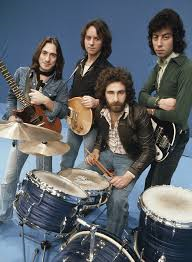 It was no coincidence of course that the vast majority of the audience were ladies of a certain age with very few men, quite sensibly, choosing to partake in this very girly extravaganza. By chance I met lots of people I knew, which was really nice, but of course it is also no coincidence that the main character was a stereotypical 54-year-old of today, and sad to say the chances of being separated or divorced are indeed quite high. Sad also to reflect that Cathy & Claire would not have anticipated that being the outcome for the Jackie Class of 1972-74 and although this is not the place to conjecture what has gone wrong, from a purely observational point of view, it seems that No – We can’t have it all. I have my own theories on that one, but perhaps for another time.

As a Scot, I am really proud that DC Thomson of Dundee, that city famed for Jam, Jute and Journalism was the publisher responsible for a magazine that both entertained and helped so many of my generation negotiate their way through those tricky teenage years. I probably still have my pillowcase somewhere with the Donny Osmond iron-on transfer (in purple – his favourite colour) and my heart-broken/heart-mended badge, both free gifts from that golden era. 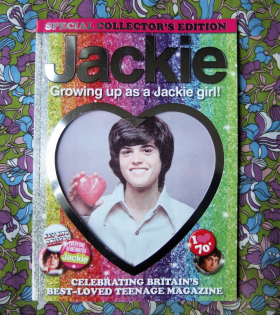 So many songs from the show that I could feature here but as I have already written about a few of the most obvious contenders, I think I will pick one of the lesser known songs that may have been forgotten about in the intervening years. Before the days of Pop Idol and The X-Factor we had much less lavish mid-week talent shows such as New Faces. One of the acts that did really well on that show was an 8-piece soul group from Manchester, called Sweet Sensation. Once signed to Pye Records, under the guidance of one of the judges Tony Hatch they started to release records and although their first didn’t make it to the charts, their second, Sad Sweet Dreamer, made it all the way to the No. 1 spot in October 1974. (Again – just so much purple.)

The readers of Jackie magazine were often sad (mainly due to boyfriend trouble – the lack of one), they were young so generally still quite sweet, and, they were all overwhelmingly “dreamers”. There couldn’t have been a similar magazine for boys at that time and practically none of the songs in the show would ever have appealed to them anyway – The Davids and the Donnys belonged to us, and boy did we dream!

Been another sad tear on my pillow
Been another memory to tell me you’re the one, girl
I kept thinking about you girl
All night long

I often feel we go in circles here as since starting the blog so many hitherto unknown connections have come to light. It turns out that the bass player with Sweet Sensation, Barry Johnson, later joined reggae band Aswad whom I wrote about only last week. Different style of music but definitely more in tune with his roots as like many of his fellow bandmates from Sweet Sensation, he was born in Kingston, Jamaica.