Well, I have a feeling this is going to be another one of my travelogue style posts but there will be a musical connection by the time I get to the end of it, I promise.

First of all, a word to the wise – If your other half decides to do a bit of browsing on your computer, forewarn them you might have set up a faster payment method on some sites, otherwise you could end up seriously out of pocket. This happened to me a fortnight ago. We didn’t really have any holiday plans for this summer, but I had mentioned I would quite like to visit the Scottish city of Dundee at some point as with the new V&A about to open, along with all the other established attractions, it does seem to be a city on the up. So, whilst I was busy watching some very worthy television (not Love Island, honest…), unbeknownst to me Mr WIAA started to scour Airbnb for accommodation in Dundee. He liked the look of one particular apartment in a converted grand old house on the Perth Road, and tested the booking system to find out its availability. Quick as a flash they came back and said yes, it was available the following week, and the payment promptly came off my account.

It was at this point he decided (very sheepishly) to tell me what he had done – “A lavish apartment…, in Dundee…, next week…,” said I, dubiously. In a former life this would have been a lovely idea, but with a business we run from home and an elderly parent to look after, not easy nowadays to take off on spontaneous jaunts. “But it’s ok”, he said, “you can ask for a refund within 48 hours if you change your mind.” Turns out you only get a refund if the trip is at least 14 days away – Looked as if we were heading to Dundee!

Suffice to say, we quickly got everything organised and had a lovely five days last week in that city famous for it’s Jam, Jute and Journalism. Despite being Scottish I had never really visited Dundee properly before, having just passed through or dropped in for a work-related meeting or course, so it turned out to be a really great trip. Like most urban areas with an industrial past, it’s inner city has seen better and more vibrant days, but it’s a city that is reinventing itself with technology parks (home to the computer games industry), visitor attractions (Captain Scott’s Discovery), arts venues (Dundee Rep, the new V&A) and education (it has two universities and many colleges) now the main source of revenue.

For me however, Dundee will always be synonymous with DC Thomson, that long-established publisher responsible for supplying our house with newspapers and magazines when I was growing up. Most homes like mine would have got the Sunday Post (complete with the Oor Wullie and Broons comic strips) and my mum also subscribed to the People’s Friend (the oldest women’s weekly in the world). I could look forward to The Bunty as a pre-teen, and then best of all, Jackie Magazine (link to a previous post) as a teenager. Had I been a boy I would have no doubt relished the antics of Dennis the Menace in The Beano and Desperate Dan in The Dandy but as a bit of a “girly girl” I preferred The Bunty, because of the dressing doll that came on the back page every week. I saw yesterday that The Beano was celebrating it’s 60th birthday and possibly because of that there is currently a big exhibition in Dundee’s very central Art Gallery and Museum, The McManus (aptly renamed The McMenace for the duration). 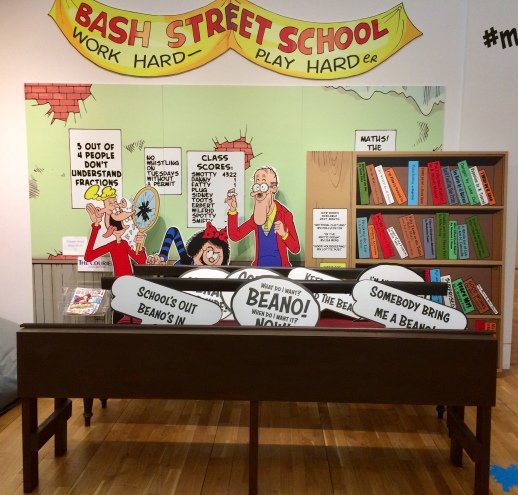 Who ate all the cow pies? 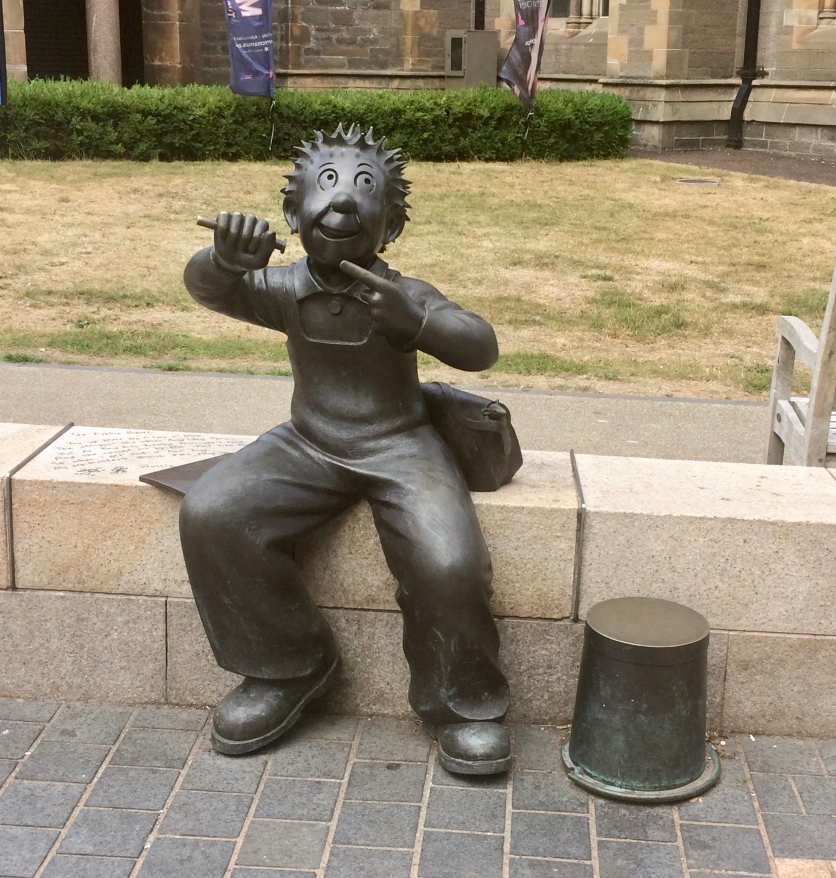 Oor Wullie and his bucket

But this is supposed to be a music blog and when in Dundee I of course thought of all the bands of my youth who came from there. A couple of summer’s ago I wrote a series of posts focusing on the sheer number of great bands who came out of Scotland in the late ’80s. One was Deacon Blue (my sister-in-law went to school with Ricky Ross) and another Danny Wilson (click links to those posts), both bands from Dundee. As they have featured here previously however, I won’t look to them for this post’s song choice – No, the artist who came to mind was the unforgettable Billy MacKenzie of the Associates whose Party Fears Two reached No. 9 in the UK Singles Chart in 1982.

Billy had a distinctive high tenor voice and dressed like a member of the French Resistance (or Frank Spencer depending on your take) so was memorable in the annals of pop, but like so many around him he died young, after committing suicide in 1997 at the age of 39. I always knew Billy was born and brought up in Dundee, but didn’t realise that he had decamped first to New Zealand at the age of 16 and then to America at 17. Billy got married to his aunt’s sister-in-law whilst over there in order to stave off deportation, but returned home after 3 months of marriage, never to see his bride again. It was then that he met Alan Rankine and the pair went on to form the Associates.

Party Fears Two by the Associates:

It’s certainly a strange title for a song and tricky to understand the lyrics other than that a party is involved. Billy did explain the origin however, “My wee brother was at a party watching two girls who wanted to come in. They were smashing windows and attempting to kick the door in with their stiletto heels, which he admired, so he christened them the Party Fears Two and I pinched the title from him.”

Hmm…, that doesn’t say a lot for the calibre of young lady who would have been attending parties in Dundee in the late ’70s/early ’80s, but here’s the thing, parties amongst young people in those days were not soirees involving sociable chit chat and fine wines, it was simply that someone had a venue, and others found out about it. The Scottish stand-up comedian Kevin Bridges sums up nicely the difference between the parties held in American teen movies and the parties the youth of Scotland were more familiar with, and if you watch this clip you’ll probably get a better idea of the “Party Fears Two”. They are probably middle-aged ladies now – I wonder if they ever found out the song was about them?

So, “What’s It All About?” – Sometimes the best trips are the spontaneous ones that come along without much pre-planning or thought. My trip to Dundee was one of those and I have another couple of posts up my sleeve inspired by the place. The V&A Dundee is to open on the 15th September and they obviously expect lots of visitors as many hotels are springing up in the vicinity. The very modern railway station is also situated just across the road. After never having been to Dundee as a tourist before, it seems I might well end up visiting twice this year – To be thoroughly recommended.

And what if this party fears two?
The alcohol loves you while turning you blue
View it from here from closer to near
Awake me

So what if this party fears two?
The alcohol loves you while turning you blue
View it from here from closer to near
Awake me

I’m standing still and you say I dress to well
Still standing still I might but it’s hard to tell
Even a slight remark makes nonsense and turns to shark
Have I done something wrong?
What wrongs the wrong that’s always in wrong

One last picture from the exhibition at the McManus – Book titles courtesy of The Bash Street Kids. Every one a winner! 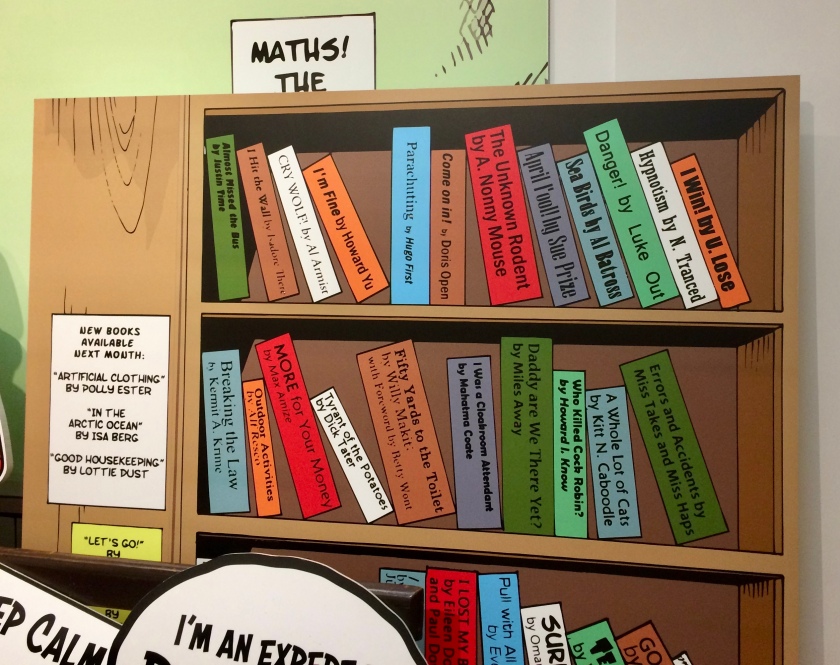 18 thoughts on “Dundee: City of Jam, Jute, Journalism and the “Party Fears Two””