When I was young, and worked in offices, I couldn’t wait for the weekend to come. From this end of the telescope I really want time to slow down a bit more, as the weekend comes round just too quickly (although always a treat to have another edition of Rol’s Saturday Snapshots). Last year I dashed off a quick poem about this phenomenon for my writing class and it made reference to three songs. As I was the most mature (chronologically) of all the students in my group, no-one recognised the songs, but I’m pretty sure regular visitors to this place will pick them out easily.

Now it comes round too quickly
Another hundred and sixty eight hours gone
Whoa time, slow down,
you move too fast

Friday On My Mind by the Easybeats:

Back then I realised I knew very little about Australian group the Easybeats who had a big hit in 1966 with Friday On My Mind, so I did a little research, and as often happens around here I discovered a fascinating rock and pop family tree.

This winter has been quite mild here in Scotland but back in 1962-63 we had what was called The Big Freeze, the worst winter on record, with snow lying eight feet deep. A TV advert at the time offered assisted travel to families who fancied a new life in Australia, and 15 members of the Young family from Glasgow moved there in June 1963. One of their sons was George Young who went on to form the Easybeats. His younger brothers Malcolm and Angus went on to form AC/DC a decade later. The Easybeats disbanded in 1969 but then in 1976 George got together with his old bandmate Harry Vanda to form new wave group Flash and the Pan. 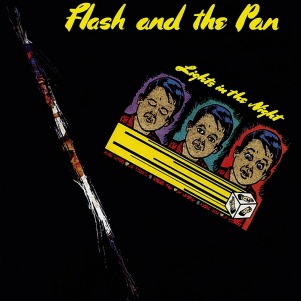 Had the winter of 1962-63 been a mild one none of these bands might ever have existed. The family initially stayed at Villawood Immigration Detention Centre on the outskirts of Sydney which was where George Young met and became friends with another migrant, Dutchman Harry Vanda, and together they formed the Easybeats. Malcolm and Angus Young then developed the idea for their band. The name came about after their sister Margaret saw the initials “AC/DC” on her sewing machine. The brothers felt this name symbolised the raw energy and power-driven performances of their music. It was she who also came up with the very memorable schoolboy outfit for Angus Young.

The song Waiting For A Train by Flash and the Pan (George and Harry’s new wave band) was the one that did best in the UK Singles Chart. It reached the No. 7 spot in 1983.

So, “What’s It All About? – I know there are lots of you who still long for the weekend but trust me, once you get to my age, you do want the week to slow down a bit more.

As for the song Friday On My Mind, Harry Vanda described it as reminiscent of the days when the band members lived in hostels in Sydney as “new Australians”. They longed for the end of the week because that’s when the fun began. The song has quite a build-up and after the opening cymbal crash, its just a staccato guitar for the next 20 seconds where the lead vocalist runs through the days of the week, explaining why Monday to Thursday doesn’t excite him. The bass finally comes in as he gets closer to the weekend. 30 seconds into the song we hit Friday, and the drums come in to play.

Well, that’s Saturday Snapshots played and my Saturday blogpost written. Better head off now and achieve meaningful things, as before we know it, it’ll be Friday again. Argh.

Friday On My Mind Lyrics
(Song by George Young/Harry Vanda)

Gonna have fun in the city
Be with my girl, she’s so pretty
She looks fine tonight
She is out of sight to me
Tonight I’ll spend my bread, tonight
I’ll lose my head, tonight
I’ve got to get to night
Monday I’ll have Friday on my mind

Do the five day grind once more
I know of nothin’ else that bugs me
More than workin’ for the rich man
Hey! I’ll change that scene one day
Today I might be mad, tomorrow I’ll be glad
‘Cause I’ll have Friday on my mind

16 thoughts on “Rock & Pop Family Trees, The Easybeats and “Friday On My Mind””