Last time I wrote about Ed Sheerin and of his success at this year’s Grammy awards. Back in 2008 it was Amy Winehouse who swept the board at the awards winning a total of six. Sadly just over three years later she was dead.

When writing earlier this year about David Bowie’s sad passing, and all the media outpouring it caused, I had momentarily forgotten what a massive news story it had been when poor Amy was found dead, at home, on a July afternoon in 2011. It was no big shock however as we had seen her life played out over the years on television and in the newspapers. After the massive success of her album “Back to Black”, her life seemed to descend into chaos – Don’t want to go into the detail here but she did appear to have serious addiction issues, relationship issues, an eating disorder and so it goes on. Were we all partly to blame? The press and paparazzi couldn’t seem to get enough of her and although her family seemed to be really supportive, in some ways they seemed to add to the feeding frenzy. 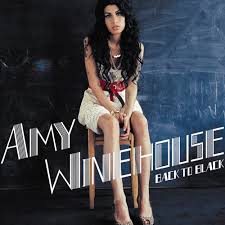 I had seen Amy on television many times over the previous few years as she started out as a soulful, jazz-influenced singer who did really well with her first album “Frank”. For “Back to Black” however she had morphed into a 21st century version of a 1960s, American girl-group member (think Ronnie Ronette with tatoos and piercings). Every time we saw her, the beehive had got bigger and the eye make-up even more extreme but sadly, she also seemed to be getting thinner and more erratic in her behaviour. I remember watching the 2008 BRIT awards with great trepidation as she was due to perform Valerie with Mark Ronson. It actually went well but she did look “unworldly” and kept pulling at her short skirt and hair throughout the performance. We all hoped that she would get the help she so obviously needed as her talent was immense, and she had so much more to give.

My favourite song from Back to Black was Tears Dry On Their Own. Watching the video again however just reminds me of the chaotic and extreme world she seemed to be living in at that time which ultimately proved just too much for her.

Tears Dry On Their Own by Amy Winehouse:

It was at the end of 2009 that we moved our entire record collection to our new Apple Mac computer. All the CDs and downloads were now in one place which was great as personal playlists of favourites could be compiled by each member of the family. My playlists generally included an Amy Winehouse track and invariably it was this song. Very sad when you listen to it now knowing that she died aged only 27. I have written a lot about icons who have passed away since starting this blog but none were young like poor Amy and I have a feeling that for some, it is only a matter of good luck that they got through their “crazy period” intact. Wasn’t to be the case for this talented lady – RIP Amy.

Tears Dry On Their Own Lyrics
(Song by Amy Winehouse)

All I can ever be to you
Is the darkness that we knew,
And this regret I’ve got accustomed to.
Once it was so right,
When we were at our high,
Waiting for you in the hotel at night.

I knew I hadn’t met my match,
But every moment we could snatch,
I don’t know why I got so attached.
It’s my responsibility,
And you don’t owe nothing to me,
But to walk away I have no capacity.

He walks away,
The sun goes down,
He takes the day
But I’m grown,
And in your way,
In this blue shade
My tears dry on their own.

I don’t understand
Why do I stress a man
When there’s so many bigger things at hand.
We coulda never had it all,
We had to hit a wall,
So this is inevitable withdrawal.

Even if I stop wanting you,
A perspective pushes through,
I’ll be some next man’s other woman soon.
I shouldn’t play myself again,
I should just be my own best friend,
Not fuck myself in the head with stupid men.

So we are history,
Your shadow covers me
The sky above,
A blaze.

I wish I could say no regrets,
And no emotional debts,
‘Cause as we kiss goodbye the sun sets

So we are history,
The shadow covers me,
The sky above,
A blaze that only lovers see,