Well, it’s the day I usually put together a post featuring a song from my past, but not in the best frame of mind for it for several reasons. I finally bit the bullet this week and replaced my trusty old steed (my ten year old PC) for an all-singing and dancing wireless version (a stallion amongst PCs) but needless to say it is taking me a while to navigate all the set-up routines, transfer over data and get used to how different it all is. I don’t do well with change and this one is frustrating me.

This song, Changes by David Bowie, is not really relevant to my particular problem but it inevitably came to mind when writing about change. From the “Hunky Dory” album, it became one of his most popular recordings ever but not a hit when it was first released in 1972 – Ironically it charted for the first time this year, just after his death. 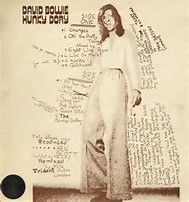 On top of the domestic upheaval with new computers, we have this momentous decision to make on Thursday which could possibly take us out of the EU and it very much seems as if people are going to the ballot box loaded with highly dubious facts, figures and scaremongering. Not a great way forward for any democratic nation. This may sound flippant but if we had a greater affinity with Europe in terms of music and film, the decision would probably have been far easier. Despite the fact that the rest of Europe puts us to shame with their excellent grasp of English, there is still that cultural barrier that sets us apart and makes us different.

Looking back over the “tracks of my years”, I can think of very few artists from the rest of Europe who have done well in the British charts. That dashing Frenchman Sasha Distel popped up in the early ’70s and the not-so-dashing Charles Aznavour a while later. There have also been a few Greeks (Demis Roussos, now forever associated with the Mike Leigh play Abigail’s Party), the phenomenon that was Abba, Boney M and A-Ha. In the late ’70s when punk kind of became mainstream, our favourite record at the local “youth club” (the only pub happy to admit 16 and 17-year-olds) was Ça Plane Pour Moi by Belgian Plastic Bertrand. A one-hit wonder, but thoroughly memorable even now.

This next one is a bit before my time but it still kind of sums up the difference between us Brits and our French neighbours – Je T’aime… Moi Non Plus by Jane Birkin and Serge Gainsbourg was inevitably banned when it was released in 1969 due to its explicit lyrics and “sound effects” but of course this just led to it becoming an ever bigger hit. I’m sure the French find our prudishness very amusing and their sub-titled films shown on television in the ’70s were awash with casual disrobing, which caused much anguish for the parents of teenagers at the time.

Getting back to the whole referendum issue however, the campaigning has now been put on hold as one of our best-loved MPs was tragically shot dead a couple of days ago in Yorkshire. This, on top of the mass shooting earlier this week in a night club in Florida, has caused an outpouring of grief and questions are being asked as to the motive for such happenings – The work of lone gunmen or part of something bigger and more sinister.

A fellow blogger was writing yesterday about songs that refer to rain and how, in a song, that particular weather condition usually symbolises sadness and dark times – This week, the sadness felt in this 1959 Buddy Holly song, Raining In My Heart, sums up how I feel. Not about a lost love but about the loss of something in society that can’t easily be identified, but something that is definitely no longer with us.

On a very literal note, it really hasn’t helped either that we have had a pretty awful week of weather with rain every day. My favourite month is not panning out as expected this year. The tennis has been heavily disrupted and the poor ladies at Ascot were draped in waterproof ponchos, their beautiful hats and outfits in many cases ruined.

As for Buddy, the non-stop touring schedule that came about as a result of his meteoric rise to fame led to the plane crash that took his life in 1959. Rock ‘n’ roll was in its heyday and he was one of its brightest stars. Considering he died very young, aged only 22, he left many songs that most people of a certain age will be familiar with – Peggy Sue, It Doesn’t Matter Any More, Rave On, Oh Boy!, That’ll Be The Day, True Love Ways and many more. He even made horn-rimmed glasses look cool – Great for the eyesight of 1950s teenagers.

As for me, I’ll try to rid myself of the black dog by this time next week when we’ll also know if we are still “in” or now “out”. Interesting times indeed.

Raining In My Heart
(Song by Bouleaux Bryant/Felice Bryant)

The sun is out, the sky is blue
There’s not a cloud to spoil the view
But it’s raining, raining in my heart

The weatherman says clear today
He doesn’t know you’ve gone away
And it’s raining, raining in my heart

I tell my blues they mustn’t show
But soon the tears are bound to flow
‘Cause it’s raining, raining in my heart

It’s raining, raining in my heart

4 thoughts on “Changes, Referendums and its “Raining In My Heart””